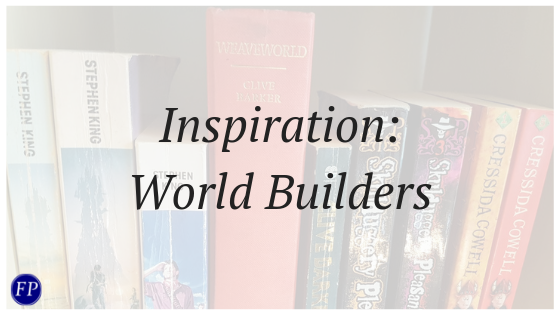 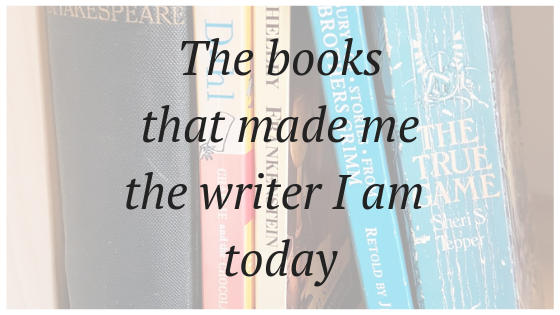 For many writers, probably all, the starting point to becoming a writer is the act of reading.

As I’ve mentioned before, I was an only child brought up in a house of books. There were no siblings to amuse, distract or terrorise me. My parents were attentive but busy. I was therefore encouraged to become comfortable with my own company.

I was especially encouraged to read because, let’s be realistic, a child reading is a lot less disruptive than a child lining up her toys on the stairs to watch an imaginary theatre production (yes, I did that).

I read hungrily and constantly, devouring whatever books were in the house and the local library, and begging my parents to buy more. I have probably read and forgotten more books than I can remember. To house all those books, assuming I had never let any of them go, would require a dedicated library (still working on that dream).

There are a handful of books, though, that inspired my imagination and started me writing. Thankfully, I still have the original or a replaced copy of each title.

One of my first books, long before I was given Ladybird books or picture books, was a massive, hardback collection of fairytales.

What I loved about the fairytales – be they Rumpelstiltskin, Hansel and Gretel, or The Little Mermaid – was that along with the magical adventures, kingdoms and beasties, there was always an element of danger.

And danger didn’t necessarily come in an obviously wicked package. Sometimes, there were gingerbread houses and seemingly kind saviours who showed you how to weave gold.

The phrases ‘once upon a time’ and ‘happily ever after’ were code for ‘Here there be monsters’.

The plays of Shakespeare

My parents each brought a tome of Shakespeare’s plays to their marital home. As a child, I would leaf through both books, choosing a role to play and casting the other parts from my favourite filmstars or childhood friends.

I read the plays in the same way as I would read a story. I suppose it’s no surprise that, as an adult, I earned a living as playwright for a number of years.

Charlie and the Chocolate Factory

When I was in hospital as a child, my primary school bought this book for me. I had never read anything by Roald Dahl and my first reaction was to be offended. A school friend of mine was in the same hospital ward briefly. The school bought The Lion, the Witch and the Wardrobe for her. I wanted that.

I couldn’t have been more wrong though. Charlie’s adventure in the chocolate factory was a modern day fairytale. There might not have been magic spells but there were lessons to be learned, danger to be faced, and tests to pass.

I was instantly hooked by Dahl’s lyrical writing and dark imagination. None of it was predictable. All of it was exciting.

Thankfully, one of my father’s colleagues bought me the follow-up novel Charlie and the Great Glass Elevator when I eventually went home, and every Christmas or birthday wish list after that included a new book by Roald Dahl.

Frankenstein is one of those novels that everyone has heard of but I didn’t actually read it until I was an adult.

In 1816, Mary Wollstonecraft Godwin (who would become Mary Shelley), Percy Bysshe Shelley, their son, and Mary’s stepsister Claire Clairmont spent the summer near Geneva in Switzerland, holidaying with the poet Lord Byron and his doctor John William Polidori. Bad weather kept them indoors and conversation turned to Erasmus Darin’s experiments to re-animate dead matter, and ghost stories. At the suggestion of Lord Byron, each of them wrote their own supernatural tale. Mary’s short story came to be the novel we now know.

The novel also questions the idea of ‘monster’. Does a monster have to look monstrous? Is a monster created by the monstrous deeds they commit? Can a monster ever change? The novel Frankenstein stares darkness in the face and says, ‘what are you?’.

This collection of three novels by Sheri S Tepper, at first glance, is a traditional fantasy novel. There’s a chart of lineage, maps showing the lands of the novel, warriors, sorcerers and healers.

The further you delve into The True Game, however, the more you come to realise that this is far from the Tolkien-esque kind of adventure it might seem.

The story is actually set in the future, there really is a game being played, and gradually technology makes itself known and then prevalent.

This mixture of magic and technology, and the hiding of this duality behind a curtain of genre expectation, made me wonder how I could play those two factors off against each other in my own writing.

Those are my five inspirational reads. What books have inspired you?