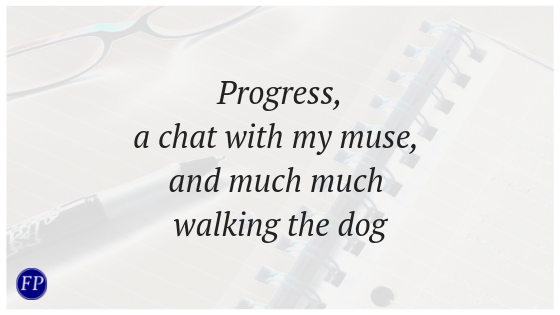 When I started this blog, it was with the honest intention to post on here a couple of times a month. So what happened to my June posts? Well, I’ll tell you.

Progress on my novel

Do you know what a developmental edit is? I didn’t until the lovely folks at my publisher, Burning Chair, let me in on the secret.

A developmental edit is what happens when your publisher/editor takes your manuscript and scours it for improvement opportunities. In essence, they make it better, on a line by line basis and also from a godly overview perspective.

June was spent applying the findings of my developmental edit to Haven Wakes. Here’s what I learned:

I finally emailed the edited version to my publisher this week, with some re-ordering of events, and a couple of completely new sections too. Fingers crossed they like it.

A chat with my muse

You know how avid readers have a tendency to buy new books even though they’re not only mid-read of one book but also have a humongously long to-be-read list? Well, writers are similar in that we are prone to coming up with brilliant ideas for new stories long before we’ve finished the one we’re working on.

My muse keeps doing that to me. “Yes, I know you’re editing your manuscript but if you could just stop for a moment, I’d like to tell you about the next book. I have this wonderful idea to…”

I tried to ignore her but, in the end, she won. She’s good, my muse, very imaginative, but also a touch random. I have pages of ideas for book two (including some cross-continental travel for my main characters) but it’ll take a massive sorting session to put them in order.

Much much walking the dog

Working on my novel this month has meant taking a ‘bigger picture’ view. For me, this requires a bit of open space and a lot of sky.

I’ve spent much of this month out walking the dog and envisioning the bigger picture for Haven Wakes and its follow-up novels.

If I let this character live, what do I do with them in book 2?

If this character intervenes here, how does this other character get away so they can do what needs to be done?

How could I bring this character back in future books?

What clues do I need to seed in book 1 for the rest of the series?

That’s the kind of question I’ve been considering on my dog walks.

What else can I tell you?

The book cover for Haven Wakes is still in the works but it’s coming along nicely. For me personally, and maybe for all writers, seeing my book cover come together is one of those giggly moments when you realise that your dream is becoming a reality.

My short story is at the editing stage and should provide a lovely taster for the world of Haven Wakes. I’m hoping that it’ll be the first of many related short stories.

We’re still on target to release Haven Wakes later this year. You’ll be the first to know when there’s a definite launch date.

There’s a lot of lovely blue sky out there today so I’m off to walk the dog for some of that bigger picture thinking. Talk soon.