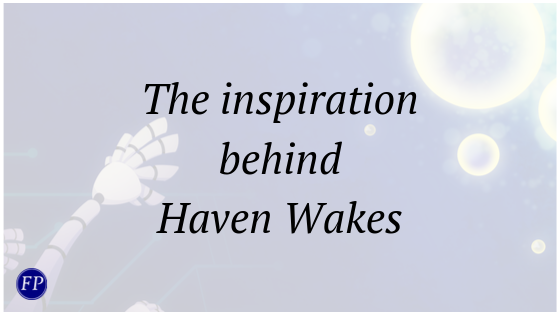 If you ask what inspired me to write Haven Wakes, I’d have to say…

Hang on, let me think for a moment. Hm. This could take a while.

Well, I suppose the first thing was:

Ever since I read my first fairytale, I’ve been fascinated by magic – magic witches, magic beasties, magic wands and books – and just how a world rich in magic would operate.

In Haven Wakes, magic is hidden from the non magical world, kept in protected areas where magic-users can live with a level of freedom and acceptance. It’s part of their DNA but it comes at a cost.

So that’s the first – magic. What else inspired me?

My childhood was spent ricocheting between Leeds, where my mum came from, the homes of various family members in Scotland (my father’s birth-country), and York where we lived.

In Leeds, I would meet the people of my mother’s past. There was the little old lady who lived in one room with her grown-up son and a gathering of cats, having filled the rest of her large terrace house with junk shop finds.

There were the elderly couple whose narrow home squeezed into a gap in a terrace of houses. She was tall with rosy cheeks, big arms and a warm, overflowing sense of humour.  He was small, quiet, and a man of the earth, always happiest in his garden.

The Scots were just as colourful. There was the auntie who would send me home after each visit with a gift of dolls or jewellery,  the uncle who would catch crabs in the harbour to the music of his portable radio, and the other auntie who would tell me tales of Nessy the monster and how to call her.

All of them were magical to me.

The travelling salesman and the dark fairy

I wrote a story called The Crystal Prince many years ago and where I might have left the story gathering dust on a shelf, two characters from that tale always called to me to re-write them.

One was a travelling salesman called Hartley Keg. He’s the kind of person who makes you smile, even when you don’t want to, who always has the right gadget to hand for any dilemma, and who carries a force of personality that speaks of authority and trust.

The other was a dark assassin, dangerous and intent on her mission. Even though she was a villain in the original story, she was always one of my favourite characters. I pulled her out of my writerly filing system, re-writing her for Haven Wakes as a dark fairy reluctantly on the side of our hero.

What will the future bring?

I live in a house of technology-fiends with gadgets galore, and that’s before you even think of computers.

My teens are the generation that has grown up with computers and mobile phones and VR just there. Whereas it was something new, at some point, to me and their Dad, they just accept all of that tech as a normal part of life.

During my lifetime, there have been so many technological changes in a relatively short period of time. Computers have gone from room-sized, to possible to fit on a desk, to small enough to sit in your palm. Phones used to be big, clunky, resin monstrosities. Nowadays everyone, including me, seems lost without their hand-held, fit it in a pocket, mobile phone.

Cars talk to us and soon self-driving cars may be the norm.

My inspiration for the futuristic world of Haven Wakes came from the thought of where these technological advances will take us. Robots? Fabrics that change colour at the flick of a switch or the brush of a hand? 3D printed food outlets? You’ll find all of that in my book.

So there you have it, all the things that inspired Haven Wakes. I’m sure there are others too, but these are the main ones.

Hartley and the darkling

And now Haven Wakes will serve as inspiration itself for book two in the series. But that’s another story, quite literally.

2 Replies to “The inspiration behind Haven Wakes”