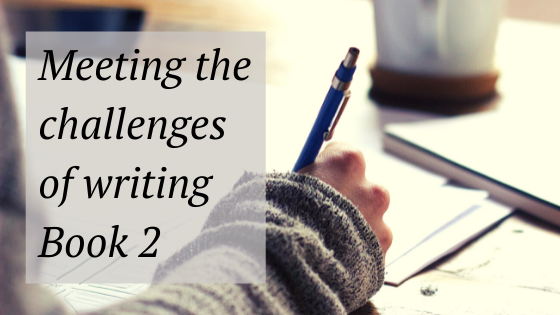 I saw my mother-in-law at the weekend. She’s not happy with me. Why? She wants to read the follow-up novel to Haven Wakes right now. Why isn’t it ready? How long does it take to write a book, for goodness’s sake?

Don’t get me wrong. My mother-in-law is lovely and very supportive of me. She’s just keen to see what Steve Haven does next. Me too.

The (fingers crossed) almost-final version of book two is with my publisher, Burning Chair. I’m waiting for the next round of edits from the lovely Si, eager to get on with the polishing process.

I have to admit that writing book two in a series has been a challenge. I even wrote about the main stumbling blocks in creating it last year, including:

•          Keeping the balance between science and fantasy

So how did I do? Did I meet those challenges?

This challenge was all about giving Steve enough reason to leave the safety of school and return to the world of magic. In Haven Wakes, Steve was pushed into that world. This time round, I wanted him to willingly jump.

In book two, Steve desperately wants to be somewhere other than the mundane world he’s always known. His time in Darkacre has changed his view on life and he’s got new, magical friends in his life that he cares about. It’s a no-brainer for him to return.

Magic and robots. You’ll find me use that phrase a lot as way to explain the world of Haven Wakes. I wanted to keep that mix in book two, but I knew that Steve would be delving further into the magical world so keeping a balance could prove difficult.

I think I’ve managed that challenge well, with a deep dive into the magical world (not just Darkacre) and a bigger picture of the workaday (scientific) world too. There are also more examples of the interplay between the two cultures.

One of Steve’s main bugbears with his parents is that they never take him with them on their travels. In book two, Steve experiences his own travel adventures.

Research for book two was extensive, to say the least, both on scientific, magical, and other topics. Want to see the list (or at least part of it)?

I didn’t use all my findings in book two. Some may turn up later in the series, or in other series after I’ve finished writing the Haven Chronicles.

This was probably the scariest challenge of the lot; creating a book that equalled Haven Wakes in quality, maintained the momentum, and pleased both my publisher and my readers. Phew!

Well, I seem to have succeeded with creating a novel that my publishers like (with a few tweaks). The verdict on whether my readers will like it is still to be reached. Personally, I love where I’ve taken Steve – even if I’ve made him suffer on that journey – and I hope you’ll love it too.

Challenge met? Yet to see.

Overall, I’ve succeeded in meeting the challenges of writing the follow-up novel to Haven Wakes and I’m keen to see what you all think of it. There’s still work to be done and sometime soon I’ll be asking for beta readers to have a look at book two. In the meantime, all I can ask is that you – and my mother-in-law – hang on for a little bit longer.