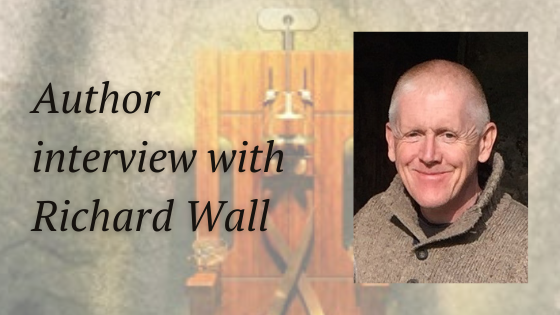 Today’s author interview is with author and poet, Richard Wall. He’s also a creator of short stories and has turned his hand to writing songs, sleeve notes, and album reviews for indie musicians. His literary creations reflect his life-long fascination with the dark underbelly of American culture.

Hi Richard. Lovely to see you today. Why don’t you introduce yourself to the readers before we get started?

Thanks for inviting me to take part. I’m Richard Wall, author of the novels Fat Man Blues, Near Death, a bunch of short stories and poems, and a very occasional blog page.

Tell us about your latest book. What’s it called and what was the inspiration behind it?

My latest book is the one that is being written as we speak. Its working title is Born Again and it’s the sequel to my second novel Near Death (see what I did there?). Born Again is set in South Carolina in 1969 and begins with the arrest of John Henry Beauregard following the grisly discovery of a dead body near his cabin in the mountains. The story follows John Henry as he tries to find a killer who seems to be controlled from beyond the grave.

The story features the return of some characters from Near Death, as well as introducing new ones, including a voodoo priestess from Louisiana. Oh, and it has fast cars and blues music, too.

It could be anything; a conversation in a bar in Clarksdale Mississippi sparked the first chapter of Fat Man Blues. A simple ‘what if’ question triggered Near Death. Driving to work one day a few years ago I was thinking about nonsense poetry when the line ’Thomas Green The Submarine’ popped in my head. That became a dark monologue which has since been narrated by Hull musician Half Deaf Clatch.

Also, reading (the verb, not the city).

I’m such a voracious reader that I have a wealth of fictional characters I would love to meet.

I would love to sit down for a meal with Burke, the anti-hero of the dark crime novels written by Andrew Vachss. The meal would be at Mama’s Chinese resturant in New York, sitting at the booth which doubles as Burke’s ‘office’.

Equally I think Tom Joad, hero of The Grapes of Wrath by John Steinbeck, would make an interesting companion.

I’m hoping that Born Again will be finished and in a fit state to be pitched to a certain independent publisher. I also have an idea to compile all of my short stories and poetry into paperback form – working title: ’Nicotine, Liquor & Blasphemy’.

Thanks for talking to me today, Richard. I’ll definitely keep an eye out for Born Again.

If you’d like to find out more about Richard and his books, here are all the useful links you might need:

And finally, here’s my 5* review of Richard’s novel.

“I do love a horror novel with teeth, and Near Death is certainly that. I expected complex, flawed characters and I wasn’t disappointed in John Henry Beauregard, a prison chaplain still haunted by his experience of the Korean war.

Near Death is a novel of parts – our first introduction to the murderous Joseph Hickey, John Henry’s attempt to leave his years as a prison chaplain behind, what happens in New York, tragedy, and the final showdown. Each part serves what is to come and adds depth to the world of the novel.

What stood out most for me was the character of Joseph Hickey. Vile. Dangerous beyond reckoning. Seemingly unstoppable. If anything is going to get a reaction out of the reader, it’s him.