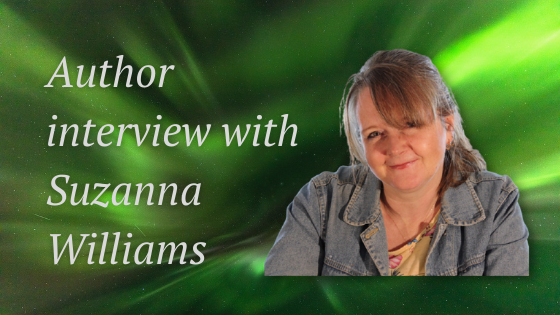 Another week (closer to Christmas) and another author interview – this time with my good friend Suzanna Williams.

Hi Suzanna. Lovely to see you today. Why don’t you introduce yourself to the readers before we get started?

Hello Fi, and all your awesome readers.

In preparing this interview, I realised my author photo was taken in 2010! Sending you a picture over ten years out of date seemed like putting a dodgy image on a dating site, so I went in search of a new one. (Note to self: need new author pic)

There are plenty of selfies with the dog on my phone, but even though she’s cute and likes to sit on my writing chair next to me, you probably don’t want to see that.

I also have lots of photos with my family, but readers will want to know that I write YA action adventure with a touch of sci-fi and a twist of romance, not how gorgeous my grandchildren are.

And then I remembered I had a photo with Fi at a reading of Haven Wakes in Chester. It was a great day. Look at our smiling faces. How could we have known that we would all be in lockdown in the middle of a global pandemic just weeks after this was taken?

It was an excellent day and that photo brings it all back.

Tell us about your latest book. What’s it called and what was the inspiration behind it?

I am completing the editing/re-editing stages on the last book in my Shock Waves series, which is called Shock Tactics.

Things have been going steadily worse for my poor hero and heroine throughout the first two books and I wanted them to finally embrace their talents and take down the bad guys once and for all. And I needed to tie up all the loose ends.

There are a couple of new characters in this book that I’ve really enjoyed getting to know, like Lee’s dad who swears all the time in Spanish, and Paige’s uncle who explains the real reason why he abandoned her to the foster care system.

So, Shock Tactics is an end to the series, but also the beginning of a new, hopefully better life for them. After all I’ve put them through, I think they deserve it.

Here’s a sneak peek at the cover.

Reading is a great source of inspiration. There is always something in every book you pick up that will spark a series of ‘what-if-they-didn’t-do-that-but-did-this-instead’ thoughts which will often morph into new plot twists for my own writing.

I also have a collection of photographs of fantastical places. Who doesn’t love a hidden space behind a waterfall? Or a house built high in a forest of redwood trees?

Molly was a perfect mother figure, not only to her own children but to Harry Potter too, so she’s bound to have cooked up a great spread.

And I might even talk her into using a little after dinner magic.

Love you, Molly. See you on Christmas Day.

I intend to relaunch/launch the complete ShockWaves trilogy early in 2022.  Watch this space.

And just in case you feel cheated you didn’t get a dog pic, here’s my writing buddy.

Thanks for the chat, Suzanna. It’s always good to catch up with you. I’ll keep an eye out for the Shock Waves trilogy in the new year.

If you’d like to find out more about Suzanna, here are all the useful links:

And here’s my 5* review of Suzanna’s novel.

This novel very quickly grounds the reader in the reality of Joe’s world – the Welsh landscape, his family farm, the local people – and draws us into his feelings about that world. There is a gentle humour to the book, the kind of banter you get between people that have known each other for a long time.

The book is written in present tense from Joe’s point of view which allows the reader to react and learn along with the character. I liked Joe from the outset. He’s hard working (unlike his medical student brother), responsible (he stays on at the family farm even though he doesn’t want to) and willing to sacrifice himself for not only those he cares about but also the occasional stranger. He’s an all round good guy who doesn’t realise his own self worth at the beginning of the novel. The interactions between Joe and the other teenagers and young people took me back to when I was that age. By the end of the novel, Joe has grown in courage and self assurance.

I have two favourite scenes from the novel that are very different to each other. The first is the party that Joe and Sarah attend. It’s probably one of the first times that Sarah has really relaxed and just been a ‘normal’ teenager.

My second favourite scene is the UFO sighting at the local pub. I love the characters’ reactions, cementing the personalities that have already been built up in previous chapters, but also it’s good to see Joe and Sarah’s plan come together, for once.

Ninety-Five Percent Human is a well written, insightful novel that mixes up the reality of our world (and Joe’s) with the concept of alien life forms and advanced technology into a believable and enjoyable read.