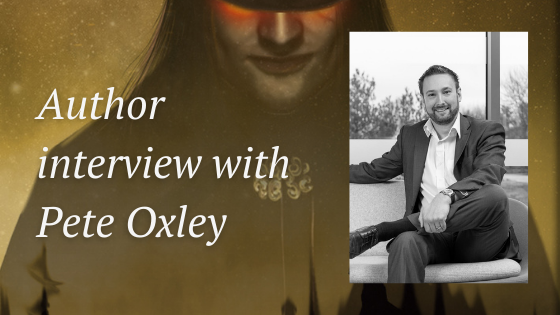 This is the last of my December author interviews, but don’t be too sad because we’re going out with a good one. Pete Oxley is not only a fellow fantasy author but also one of the faces behind those lovely bookish people, Burning Chair Publishing.

Hi Pete. Lovely to see you today. Why don’t you introduce yourself to the readers before we get started?

Hi Fi. Thanks for having me! I’m Pete Oxley, author of the Infernal Aether series of steampunk-inspired dark fantasy novels. I’m also the better looking half of the team at Burning Chair Publishing…

Tell us about your latest book, Pete. What’s it called and what was the inspiration behind it?

My latest book is one I’ve been threatening my readers group with for far too long. It’s called The Great Big Demon Hunting Agency, and is an irreverent spin-off from my Infernal Aether books. It takes place a couple of years after the events of Beyond the Aether and focuses on a couple of characters who were bit-part players in the main series – lovable rogues Spencer and Bart. In terms of inspiration for the book, those two characters were initially just little plot devices, but they muscled their way in to the story time and again, insisting that I give them more air time. I had to cut most of their scenes from the main series – they were too much of a distraction from the main story arc and characters – so I promised myself I’d give them their own proper series when I could. My past few years have been focused on editing and publishing other authors’ books, including your good self, but for my own sanity I still need to write my own stuff now and again. I am in the thick of the final, final draft of this one, so my aim is to get this out in the first few months of 2022. As I say, it’s been much delayed, mainly thanks to us getting Burning Chair up and running, but I’m confident it’ll be worth the wait.

As soon as the book is ready I’ll be letting my readers group know – you can join that on my website, or join the Burning Chair readers group and we’ll again make sure you’re the first to know!

Exciting stuff! Speaking of inspiration, what inspires your writing?

Often it’s something I’ve read or seen which doesn’t quite go as far as my fevered imagination would like it to. My Infernal Aether books were inspired by Pat Mills and Kevin O’Neill’s outstanding comic book series Nemesis the Warlock, and in particular the story The Gothic Empire, which blew my tiny mind as a teenager – the idea of a totally amoral anti-hero got all sorts of things whirring in my brain, especially when  combined with a demonic steampunk world. A few years later, this got mixed with the character Angelis from Buffy the Vampire Slayer, and lo and behold: N’yotsu was born!

Like most authors, I’ll usually find that inspiration hits me at the most inconvenient moments – the shower, walking the dogs, in a meeting at work. As a result my study is full of scraps of paper and scrawled notes with random ideas on, most of which are yet to see the light of day. Yet.

Oooh, good question. I’m a huge Doctor Who fan, so any of their incarnations would be a dream come true for the young kid in me (I’m still refusing to grow up…!). Then again, Harry Paget Flashman (from George MacDonald Fraser’s outrageously good novels) would be huge fun to spend the afternoon with. I suppose it would be cheating to say The Ghost of Christmas Present, simply because I can’t get enough of different Christmas traditions and would happily relive the day over and over? Do I have to choose just one? OK, I’ve got it. It could only be one person: Hartley Kegg, from Haven Wakes – enigmatic, boisterous fun; and if we run out of food, wine or entertainment, he could use his chalk to take us somewhere to replenish!

(How many Brownie points do I earn for that answer? 😊 )

Hartley thanks you for the compliment. Finally, what bookish plans do you have for 2022?

As far as Burning Chair goes, we’ve got an extremely exciting launch schedule already planned, including the latest from someone called Fi Phillips – you might have heard of her? Added to that we have the next volume in Andrew Neil Macleod’s The Casebook of Johnson & Boswell, plus new books from a frankly ridiculous number of talented, hitherto undiscovered authors…!

As for me personally, there’s the first Spencer & Bart adventure, which will certainly spawn more books. I’m also working on a crime heist thriller set in the 18th century, which I’m aiming to publish in the second half of 2022 and again will be the first of a long series starring a bunch of characters who’ve been clamouring at me to get them on the page for many years now. It’s going to be a challenge, but I’m a big believer in aiming for the stars – in the words of the great Ted Lasso: “Taking on a challenge is a lot like riding a horse… If you’re comfortable doing it, you’re probably doing it wrong.”

Finally, I just want to wish you and your readers a merry Christmas, and a happy and prosperous 2022!

And to you, Pete. Thanks for chatting to me today. I’ll keep an eye out for The Great Big Demon Hunting Agency in the new year.

If you want to find out more about Pete and his fantastical imaginings, here are the links:

And finally, here’s what I thought of Pete’s novel The Infernal Aether (for 5*).

“If Wilkie Collins, Edgar Allan Poe and Dennis Wheatley wrote a book together, this would be it.

Demons. Victorian Britain. Mystery. Plenty of buckles being swashed. And a cast of likeable, if sometimes broken characters. What more could you ask for?”