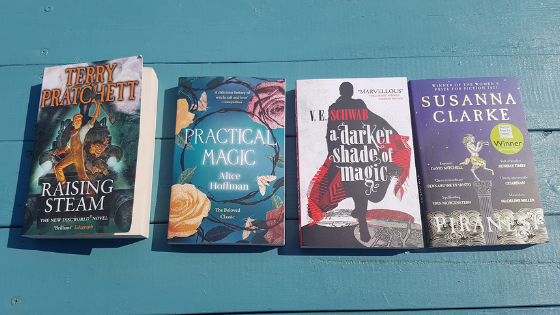 Spring in North Wales is increasingly pleasant; one might even say ‘sunny’. As a result, I can spend much more time out of doors and especially in my garden, meaning a lot more reading.

So, with book two of the Haven Chronicles in the hands of Burning Chair and progress on book three going well, I’m allowing myself lots of time to catch up on my increasing to-be-read pile.

Here’s what I’m reading this spring:

I’ve been a fan of Terry Pratchett’s writing since I read his novel The Colour of Magic back in the 1980s. His quirky, intelligent, and entertaining take on fantasy is always a joy to read and Raising Steam, although longer than his earlier novels, is just as good.

Moist von Lipwig is not a man who enjoys hard work – as master of the Post Office, the Mint and the Royal Bank his input is, of course, vital . . . but largely dependent on words, which are fortunately not very heavy and don’t always need greasing. However, he does enjoy being alive, which makes a new job offer from Vetinari hard to refuse . . .

Steam is rising over Discworld, driven by Mister Simnel, the man wi’ t’flat cap and sliding rule who has an interesting arrangement with the sine and cosine. Moist will have to grapple with gallons of grease, goblins, a fat controller with a history of throwing employees down the stairs and some very angry dwarfs if he’s going to stop it all going off the rails . . .

When I wanted to go out with a book in hand and couldn’t find Raising Steam, I decided to take Practical Magic with me instead. The plan was to start it and then put it down again until I’d finished Raising Steam. That didn’t work out, and I’m now alternating between the two because they’re both so good.

I loved the film of Practical Magic but the book is even better. Here’s the blurb:

As children, sisters Gillian and Sally were forever outsiders in their small New England town, teased, taunted and shunned for the air of magic that seems to sparkle in the air around them. All Gillian and Sally ever wanted was to get away.

And eventually they do – one marries, the other runs as far from home as she can manage.

Years later, however, tragedy will bring the sisters back together. And they’ll find that no matter what else may happen, they’ll always have each other. An enchanting tale of love, forgiveness and family, Practical Magic is beloved of readers of all ages.

Next read: A Darker Shade of Magic by V E Schwab

I have to admit that I know nothing about this author or her writing but the blurb of her fantasy novel, A Darker Shade of Magic, drew me in straightaway. Here it is:

Most people only know one London; but what if there were several? Kell is one of the last Travelers—magicians with a rare ability to travel between parallel Londons. There’s Grey London, dirty and crowded and without magic, home to the mad king George III. There’s Red London, where life and magic are revered. Then, White London, ruled by whoever has murdered their way to the throne. But once upon a time, there was Black London…

Last read of the season: Piranesi by Susanna Clarke

I’ve heard such good things about Piranesi that I made sure to add it to my Christmas present list in 2021 (thank you, husband for paying attention). I can’t wait to read it. Here’s the blurb:

In his notebooks, day after day, he makes a clear and careful record of its wonders: the labyrinth of halls, the thousands upon thousands of statues, the tides that thunder up staircases, the clouds that move in slow procession through the upper halls. On Tuesdays and Fridays Piranesi sees his friend, the Other. At other times he brings tributes of food to the Dead. But mostly, he is alone.

Messages begin to appear, scratched out in chalk on the pavements. There is someone new in the House. But who are they and what do they want? Are they a friend or do they bring destruction and madness as the Other claims?

Lost texts must be found; secrets must be uncovered. The world that Piranesi thought he knew is becoming strange and dangerous.

Ooh, look! The sun’s out. Maybe I should take the dog outside – she’ll enjoy that. I’m sure she won’t mind if I take a book with me. Now, Pratchett or Hoffman? Hm…