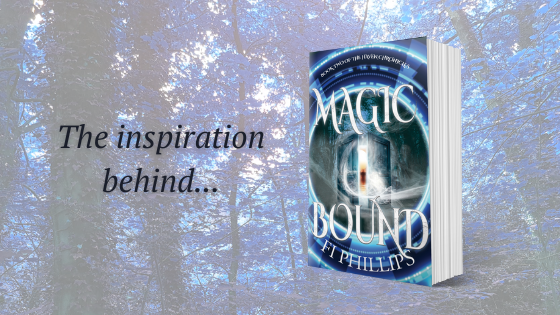 Back in 2019, in the run up to the release of Haven Wakes, I wrote a blog post about the inspiration behind the novel. I wrote about magic, the colourful folk I’d grown up with, and literary characters who had stayed with me for years. Now, with a release date in sight for book two in the series, Magic Bound, I think it only fitting that I tell you about the inspiration for that novel too.

Haven Wakes is where Steve’s adventure and journey into magic begins. It’s where he discovers that magic exists and makes new friends, Hartley Keg and Blessing. It’s also where he finds out that his family has a connection to this hidden world. Most important of all, he discovers just what he is capable of.

Haven Wakes sets a firm foundation for Magic Bound and the rest of the series.

A bigger look at the workaday, tech-led world

There was only so much of the futuristic world that Steve grew up in that I could reveal in one book. In Magic Bound, I wanted to investigate that world in more detail. From the public transport system, to non Haven robots, to how people live in the modern world beyond the city limits of Caercester, Magic Bound widens the reader’s viewpoint on the workaday culture of the novel.

And a bigger look at the magical world

The hidden world of magic is so much more than Darkacre. I wanted to explore that in much more detail. How are the magicals governed? How many workadays know about them? Are there other communities like Darkacre? Is the Reactor a one off device or part of something larger? What is the connection between magic and the Havens?

I wanted to answer all of these questions and more in Magic Bound.

Since I was a child, I’ve been intrigued by the magic that’s inherent in mythology, fairytales, and folklore. I wanted to bring more of that to Magic Bound in a range of new characters. Some will be back later in the series; others may have books and short stories of their own.

Steve is growing up

Haven Wakes is just as much about Steve discovering his own capabilities as it is about his discovery of magic.

As Magic Bound begins, Steve turns 13. He’s a teenager and as he tries to work out what that means, he’s drawn back into the hidden underbelly of magic. I wanted to show his development into a young adult and his growing confidence in who he is.

Stories may be imaginary, but they are also based in the truths that we know. Just as real life has consequences, so too do the fictional happenings in books. Steve and his friends would always have to answer to the magical powers that be for their actions in Haven Wakes. I wanted to explore these consequences and the resulting path that Steve would be forced to take in Magic Bound.

Magic Bound will be published by Burning Chair on 2nd August 2022.