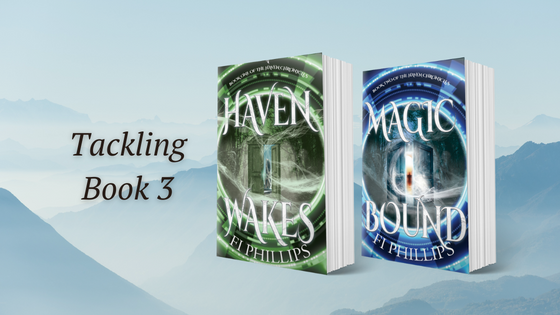 If you follow me and my writing, you’ll know that the second book of my YA futuristic fantasy series was released at the beginning of August. Magic Bound picks up the story a few weeks after the end of Haven Wakes. Steve and his friends face the consequences of their actions, head off on a new adventure into a bigger slice of both the magical and non-magical worlds, and struggle against two new big-bads.

With Magic Bound out in the world, it’s time to tackle the next novel in the series. In a lot of ways, writing book three isn’t so different to writing book two. It involves:

Book three picks up almost immediately after the end of Magic Bound and addresses an issue mentioned by several readers – where are Steve’s parents? That is Steve’s reason for continuing his journey into magic.

In book three, you’ll read about many of the familiar locations you already know – Darkacre, the Haven Robotics Corporation offices, and the Council controlled Confluence too – but Steve will visit plenty of new places too, both magical and workaday.

There’ll be more information on Steve and his family, and revelations aplenty about their connection with the world of magic.

There’s an old foe to parry with and a new threat too, more powerful than any that Steve has faced before.

While there’s always room for change when writing a novel, one thing I know for sure is that this isn’t a trilogy. Book three is not the end for Steve and his friends.

If you’d like to keep up-to-date with my writing news, and receive a free short story too, why not sign up to my Author News.