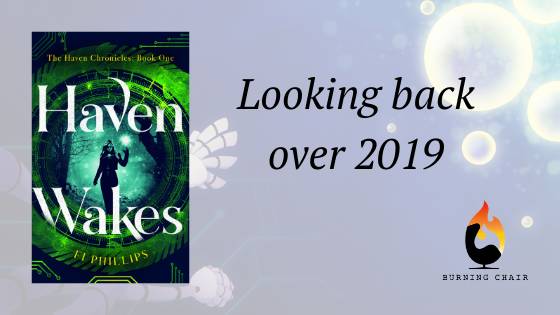 It’s time to look back over the last twelve months and all the goodies 2019 has brought with it.

So I began the year with fingers firmly and hopefully crossed. Having submitted my novel to Burning Chair Publishing right before Christmas, this was the last chance for Haven Wakes. If they said no, I would shelve my precious book and begin something completely new.

January was a month of waiting to hear whether Burning Chair liked my novel, and when I finally thought it would be a ‘no’ or I wouldn’t hear back, I got the email I’d been hoping for – a request for the entire manuscript.

February was another month of twiddling the digits and waiting. Would Burning Chair be as keen on the entire manuscript as they had been about the first few chapters?

At the beginning of March, I received an email from Burning Chair asking to speak to me on the phone. Eek! Their call coincided with their visit to the London Book Fair and they finally gave me the news I’d been waiting for. They wanted to publish Haven Wakes!

Over that month a number of things happened:

My publishing journey had begun.

April, May and June

By the end of April, my website was live.

May and June were all about the edits, by both me and Burning Chair, and beginning the process of finding a book cover design for Haven Wakes.

In July, I added my short story, The Hidden Knowing, as a freebie for subscribers to my newsletter, and continued with the edits.

The book cover design for Haven Wakes was revealed in the middle of August, courtesy of Stuart Bache and Books Covered.

With the final edits finished, the countdown began to publication day.

Haven Wakes was published on 1st October in paperback and e-book formats. That sounds all very factual but for me, it was a dream come true. That’s a cliched phrase, I know, but that was how it felt. After years of trying to get my fiction writing out there in the big, wide world, we had arrived.

October was the proverbial whirlwind of blog posts, promotion and congratulations. By the end of the month, the penny had finally dropped – I was a proper, official, published author and I had a second novel to write.

November saw me use the monthly writing marathon of NaNoWriMo to begin the first draft of the next novel in the Haven Chronicles series and cement my standing as an author by giving readings from my novel at the Chester Literature Festival.

In December, I received an early Christmas present as Haven Wakes became a No. 1 Bestseller on Amazon.

This time last year, I had no idea what 2019 would hold for me or where it would take me. Who knew what magic would reveal itself?

Book Two of the Haven Chronicles is my 2020 focus.

Steve is back with Hartley, Blessing and the darkling, but with a whole new cast of villains and supporters. He thought his life had already changed beyond recognition, but the journey has hardly started.

I already have it plotted and I’m a few chapters in. Wouldn’t it be wonderful to see it published next year? 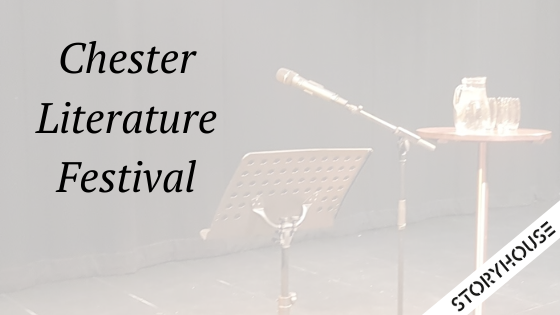 So, wow, that was quite a month.

In case you hadn’t already worked out from my last blog post and many many social media posts over the last few weeks, this month I took part in two author slots at the Storyhouse Theatre for the Chester Literature Festival.

This was my first foray into appearing in front of an audience (a) as an author and (b) to give a reading from my novel. I’ve performed on stage before, but this was a completely different experience. I wasn’t hiding behind a role or stage make-up. I was standing up there and saying, ‘this is me and this is what I write’.

The first reading was the Elevenses slot on a Sunday morning in the Storyhouse Kitchen, which is a big open seating area in the theatre. I knew there would be people there just for the bar and food, and other people passing through to buy tickets, but I hoped that even if nobody turned up specifically to see me, some of them would take the time to listen.

As it was, I ended up with an audience of children who sat and quietly listened as I read a couple of chapters from ‘Haven Wakes’.

And at the end, I got applause, not just from the children but from lots of the adults who were sat around in the Kitchen too.

Amongst those adults was fellow writer and long-time writerly buddy Suzanna Williams. Great to meet up with you, Suz.

My second reading took place the following Sunday night in the Garrett Theatre at the Storyhouse as part of the ‘Your Voices’ event.

I was just one of five writers who gave readings that evening:

One of the best parts of the evening, beside giving my reading, was getting to meet up with fellow storytellers and swap experiences.

A big thank you to Sam and Emily for organising and co-ordinating the Festival, and for your help and kind words at my two slots.

I’d love to take part in next year’s Chester Literature Festival (by which time, I should have a second novel published) so as they say ‘watch this space’. 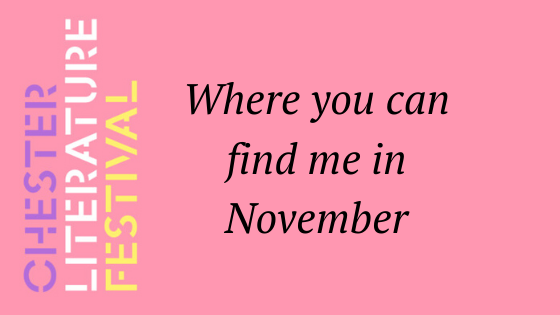 This month, I’ll be taking part in the Chester Literature Festival to give readings from my debut novel, Haven Wakes.

On Sunday, 17th November, you can catch me at the Storyhouse in Chester giving a 20 minute reading as part of LitFest Elevenses. My slot begins at 11.00 am in front of the big screen in the Kitchen.

This event is completely free to attend so why not come along and grab yourself a coffee while you listen to a couple of chapters from my novel.

On Sunday, 24th November, starting at 8.00 pm in the Garret Theatre in the Storyhouse, I’ll be taking part in Your Voices: Celebrating Local Writers.

Tickets for this event cost £3.00 and can be purchased through the link above.

I’ll have copies of Haven Wakes with me at this second event if you’d like to buy a copy at £8.99. Unfortunately, I won’t have the resources to take card payment, so it’ll be good old cash only.

I’ll report back later on how my Festival appearances went. Wish me luck.