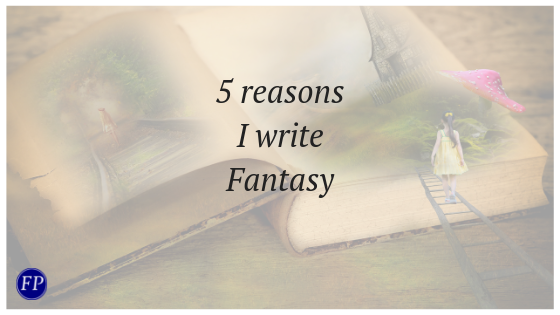 Since I first wrote a fantasy story, back when I was a child, I have always been drawn to this genre, both as a writer and a reader.

Let me tell you why.

Seeing beyond the mundane with a writer’s eye

I don’t think I’m the only writer who does this, but I’ve always looked at the world from a curious, searching and to an extent alternative eye.

When I look at a photo, it’s the quiet background details that stand out to me, such as the reflection cast on the window glass behind the family posing for a holiday snap or the half hidden gateway beyond the beautiful garden.

My inspiration is often drawn from a ‘what if’ mindset. What if the family were unaware of the shadowy presence that stood just beyond the photographer’s shoulder? What if that half hidden gateway led to a world of mystical wonders?

My ‘what if’s always lead me to fantastical scenarios and magical characters.

It’s all about the magic

By definition, fantasy stories must always include some element of magic, be that magic spells, magical artefacts or mythical creatures.

I suppose my love for magic began with the fairytales I read as a child. There was the fairy godmother in Cinderella and her transformation of the pumpkin (to a carriage), mice (to footmen and horses) and of our heroine herself, the curse cast over Aurora in The Sleeping Beauty, and the little mermaid’s transformation into a human.

Magic opens up so many more possibilities for a story, like a magical doorway to escape through, runes that imprison, and mystical healing powers (all of which you’ll find in Haven Wakes).

There are countless mythological and magical animals in fantasy stories to write about or use as a basis to invent a new animal.

There are mermaids, and goblins, and giants, and dragons, and… I could go on forever. Alongside those childhood fairytale favourites, I also read a lot (and some more) of mythology stories.

My mind brims over with fantastical beasties to include in my stories, and I love them all – even the dark and sinister ones.

You’ll find fantasy fiction written for all of the readership age groups. There’s the Harry Potter and Skulduggery Pleasant books for the younger readers. Fantasy-loving teens can enjoy books by writers like Cassandra Clare and Suzanne Collins. For adults (young, new or more mature), there are plenty of fantasy novels like the Game of Thrones novels, the Terry Pratchett Discworld books, and The Night Circus.

Haven Wakes is written for an 11+ readership but I also have ideas that would work better for teens, and others that would definitely be for mature readers. Writing in this genre doesn’t limit the age of my potential readership.

I keep coming back

I’ve read plenty of other genres, especially as a literature graduate, and I’ve tried my hand at writing outside the fantasy genre (I spent two decades writing murder mystery plays) but the genre that I return to time and time again as both as a reader and a writer is fantasy.

It’s where I feel most at home. It’s the genre I read when I need to escape the hardships of life, and the genre I write when at my most inspired.

One Reply to “5 reasons I write Fantasy”