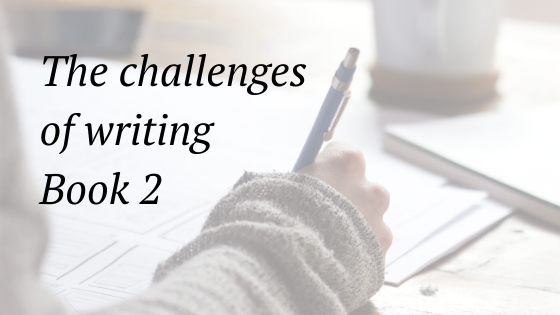 Ever since, Haven Wakes was released on the big, wide world, I’ve been working on the follow-up novel. It doesn’t have a title yet, so for now let’s just call it Book 2.

I knew where I wanted to take Steve for the next stage in his adventure with Hartley, Blessing and the darkling, but the question was should it be a straight route there or something altogether more winding and obstructed?

I began on the ‘straight route’ back in November when I used the 2019 NaNoWriMo challenge as the springboard to get my novel started. By the end of the month, I’d come to the conclusion that the straight route wasn’t going to work.

In December, I stepped onto that winding and obstructed path and started my novel again.

I’m now several chapters into writing Book 2 with a clear idea on all the places Steve will go and the faces he will meet.

So that was the first main challenge of writing book two of a series dealt with and brushed off. What about the others?

In Haven Wakes, Steve was pushed into a hidden world of magic but in Book 2, what could possibly persuade him to return?

Well, he misses his new magical friends and he definitely wants to escape his miserable school life, but is that enough? I didn’t think so.

So what would motivate him to leave his ‘normal’ life behind again? It had to be something that pulled on his heart-strings and irked his sense of justice. There also had to be consequences to not getting involved.

In the end, I decided to put someone he cares for in peril.

One of the things my publisher Burning Chair and lots of my readers loved about Haven Wakes was the mixture of magic and futuristic tech. In Book 2, I want to maintain that mix but seeing as Steve will be exploring even deeper into the world of magic, working out how I could include more sci fi elements had me in a bit of a quandary.

In the end, I decided to show the reader more of the world of the Haven Robotics Corporation, and send Steve and his friends off to a destination that relies on technology to survive.

Haven Wakes takes place within the confines of the city of Caercester. In Book 2, I wanted to show the reader what other places exist in Steve’s world, both magical and workaday.

In my first novel, the Magical Council was only briefly touched on. In Book 2, you’ll learn much more about them and the rules that govern the magical community.

Remember that destination that relies on technology to survive? It needed to be somewhere remote, but reachable (by workaday transport or, of course, by magic). It also had to be a place that a special new character had a reason to visit.

In the end, I found a real-life destination that I’d never heard of until earlier this year which is perfect for a show-down between Steve and co. and, well, that would be telling. You’ll have to read the book to find out.

If I thought the research for Haven Wakes was hefty, Book 2 has easily outdone that. There has been so much research to get my head round, research on:

I have to guard against being sucked into my research so much that I don’t have time to write.

By the time, I submitted Haven Wakes to Burning Chair, it was a well-loved and matured beastie. The editing process, guided by my publisher, polished it into the final version that was launched on the world last year.

Now, I have to write a book that:

That’s the scariest challenge of them all but I’m sure I’m not the only author who has ever felt that way. Wish me luck.

I’d love to hear what your hopes are for Book 2 in the Haven Chronicles series. Let me know and maybe I’ll include it.